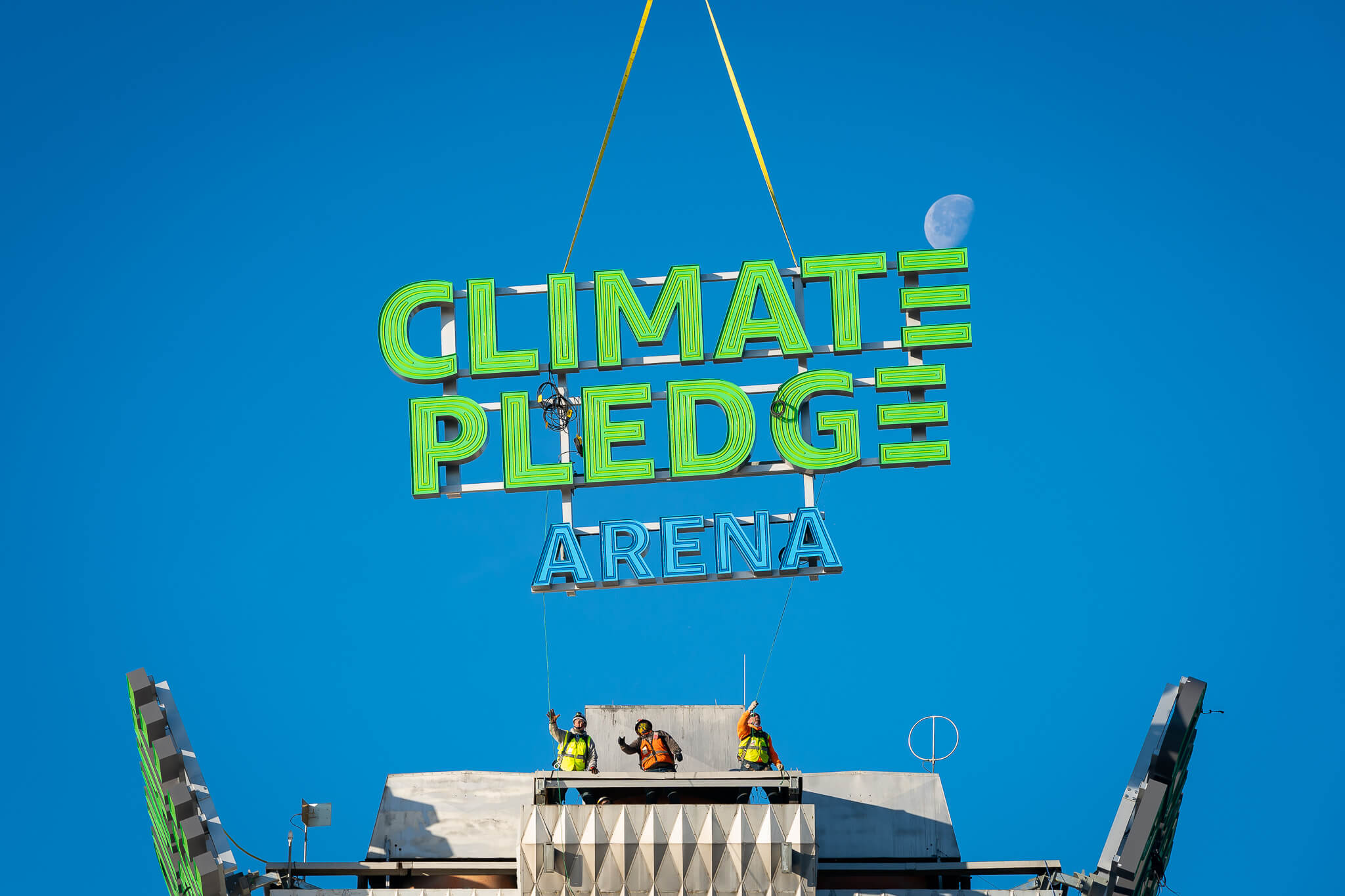 SEATTLE, Wash. (Dec. 16, 2020) – Jones Sign Company is helping brighten the Seattle skyline with the recent installation of a four-sided building sign for the new Climate Pledge Arena. The “crown ID” was installed with the assistance of a Blackhawk helicopter earlier this month atop the landmark 1962 World’s Fair roof, which will cover a brand-new arena on the Seattle Center campus.

Scheduled to open in fall 2021, the future home of the NHL Seattle Kraken, WNBA Seattle Storm and dozens of annual concerts with aims to be the most sustainable arena in the world. With a similar commitment to sustainability, Jones Sign manufactured and installed the more than 12-ton sign in alignment with the arena’s zero-carbon mission. In particular, the new crown ID is illuminated using faux-neon LED lighting, which uses 60 percent less power than a traditional neon sign of similar scale.

“Neonis an energy hog and high maintenance because you have to change out the lights,” said Jeff Goodfellow, operations manager for Jones Sign Reno. “LED will last tens of thousands of hours. This is a vanguard step for the [Climate Pledge] movement rather than the signs of old. It’s better for the planet.”

To create the faux-neon look, the insides of the letters were painted white to reflect light and then assembled in a sandwich-configuration with one of the three other paint colors.

With 14 locations across North America, a shorter-than-usual timeframe prompted Jones Sign to build the framework to hold the 72 letters at its Green Bay, WI headquarters and fabricate the letters at its plant outside Reno, NV. With a team of certified welders, Jones Sign was able to accommodate changes and deliver the sign in record time.

Installation of the crown ID marks a milestone in the construction and development of the eagerly anticipated Climate Pledge Arena and its crowning sign. With itsbeaming letters visually nestled among snow-capped mountains and the Space Needle, the Climate Pledge Arena’s new crown ID has created an indelible impression on the Seattle skyline.

“I didn’t realize the excitement level until I arrived in town,” said Bob Lepak,VP of manufacturing and installation for Jones Sign on the day the crown ID was installed. “I really started to get the vibe with people walking by the sign [stationed on the Fountain lawn]. I haven’t experienced people being so interested in the signs as this week and especially today. It’s a privilege to be part of it.”

Find more information on the Climate Pledge Arena, plus videos of the installation and the story behind the sign, at climatepledgearena.com.